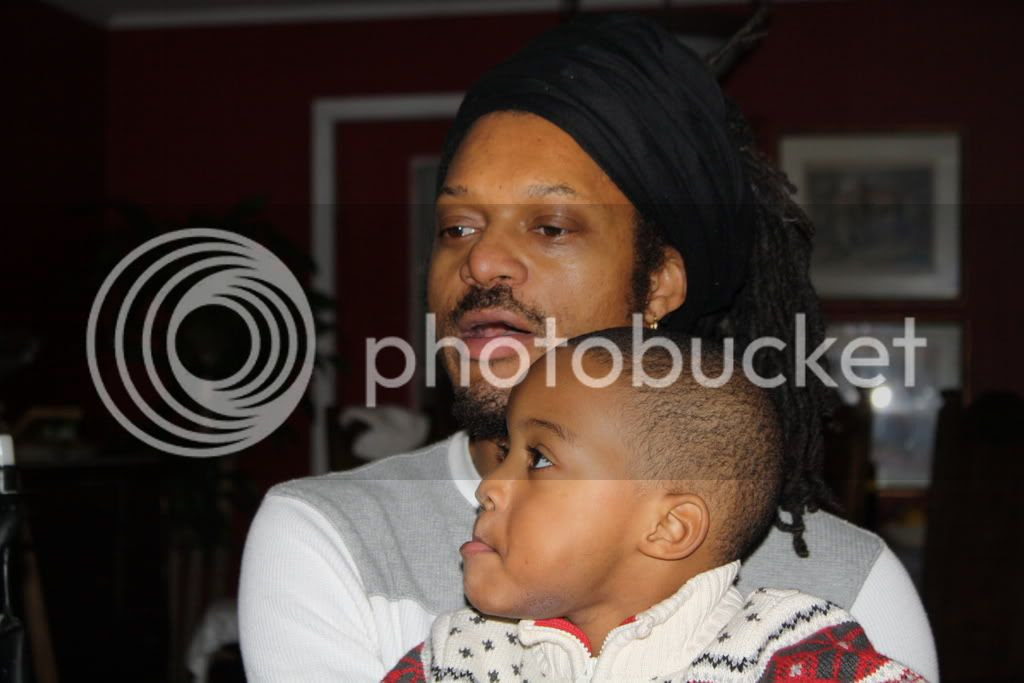 I need not have worried. Mwandishi reminded me that Granddad, my biological grandfather whom I never met, had a love affair with caramel cake. Once, back when I first found them, Granddad sat in the passenger seat of my car looking out into the dark night as I drove from Portland to Boston. Perhaps he was making his presence known when that cake was overflowing in the oven, smoking up the kitchen like a barbecue pit.

After we could finally pull ourselves up from the table, stuffed as the stuffed vegetables, we opened gifts. My nephew was the star of the show. Of course.

The weather outside was blustery but mild. Most of the snow from the big storm days before melted. Inside, the wood burning stove blazed. The aroma of cinnamon and garlic and baking yeast mixed with the music of Yuletide as Nat King Cole crooned about chestnuts roasting on an open fire. Growing up, it wasn't until Daddy piped in the great singer's voice from his basement barroom did Christmas officially come to pass in our home.

I miss Daddy terribly. Wanted to call him up to hear him tell me what he he had cooked for the day, but his spirit was all over the place. Looking in the cupboard for something else, I found his Pabst BlueRibbon mug and placed it at the head of the table. Job fought off tears. Mama said she could hardly get out of bed Christmas morning. Spent most of the day at my godmother's and was in good spirits when she got home. Gina was sick as a dog. Most she could do was drop some peel and eat shrimp in a Zatarain's boil like he used to do and call it a (holi)day.

It's only the second Christmas without him. More emotional even than the first.

The dinner made me drool with envy. Your nephew is a doll. I tried making caramel cake from scratch only once. Only dish that made me cry in the kitchen. I'm not bad in the kitchen, but it licked me, and I never attempted to make it again.

This was the first Christmas without Mama. I made pancakes just like my father had done every Christmas. But, this year, it was just me and my sister eating them. My niece didn't want to leave her house, and with a baby, I couldn't blame her - come out for pancakes? But, I would be lying if I didn't say I wasn't sad eating my pancakes this Christmas. We were still ignorant about Mama's illness last Christmas. We are fast approaching the anniversary of the day we realized something was wrong with her. I haven't been in high spirits this Christmas season. I hope it gets better. So, I relate to you missing your Daddy.

You had a christmas dinner like it is meant to be! Sounds delicious and looks amazing.

Santa brought quite some books, the best presents.

Enjoy the last days of the year and we wish you an amazing 2009 full of positivity and historical change in the world! Feel, expercience and be part of what 2009 will bring.

Craig, your narrative is only matched by your menu and the pictures that go with it.
I was crying before I read Jop filled.
When we got home we put on a little Luther, thanks to you.
May your New Year be filled with new experiences that are enriching and magical

Wow, what a great dinner you made and eat:))
Very nice pictures from your family Christmas!

And it is always good to remember the loved ones we have lost......

I noticed that the slideshows don't always show all the pictures. If they pause, they loop back to the beginning.

There are 50 photos in the first one and about 45 in the second.