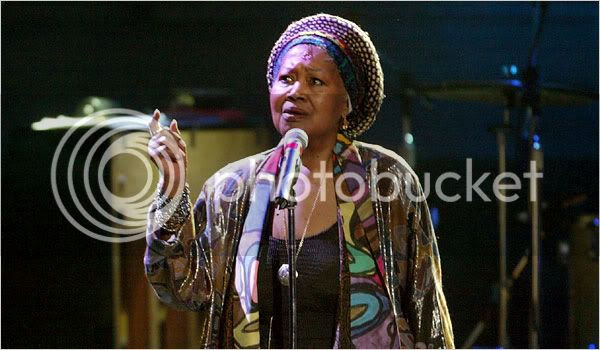 Odetta at Radio City Music Hall in New York for a "Salute to the Blues" Benefit concert in 2003. Nancy Siesel/The New York Times

Odetta, the singer whose deep voice wove together the strongest songs of American folk music and the civil rights movement, died on Tuesday at Lenox Hill Hospital in Manhattan. She was 77.

The cause was heart disease, said her manager, Doug Yeager. He added that she had been hoping to sing at Barack Obama’s inauguration.

Odetta sang at coffeehouses and at Carnegie Hall, made highly influential recordings of blues and ballads, and became one of the most widely known folk-music artists of the 1950s and ’60s. She was a formative influence on dozens of artists, including Bob Dylan, Joan Baez and Janis Joplin.

Her voice was an accompaniment to the black-and-white images of the freedom marchers who walked the roads of Alabama and Mississippi and the boulevards of Washington in the quest to end racial discrimination.

Too bad she wasn't able to hang on till January 20. Wasn't meant to be. Here's her singing "House of the Rising Sun."

Love that song too!