Inauguration Is a Culmination for Black Airmen

When the Tuskegee Airmen, the all-black force of elite pilots, emerged from combat in World War II, they faced as much discrimination as they had before the war. It was not until six decades later that their valor was recognized and they received the Congressional Gold Medal, the highest civilian honor Congress can give.

Now, the roughly 330 pilots and members of the ground crew who are left from about 16,000 who served are receiving another honor that has surpassed their dreams: They are being invited to watch the inauguration of Barack Obama as the country’s first black president.

“I didn’t believe I’d live long enough to see something like this,” said Lt. Col. Charles A. Lane Jr., 83, of Omaha, a retired Tuskegee fighter pilot who flew missions over Italy. 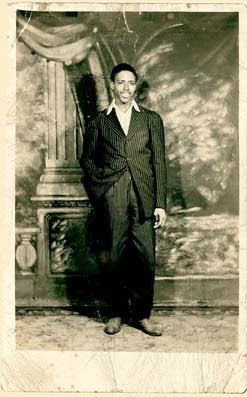 Mr. Obama has acknowledged his debt to the airmen, issuing a statement in 2007, when they received the Congressional Gold Medal. It said in part: “My career in public service was made possible by the path heroes like the Tuskegee Airmen trail-blazed.”

My father, as some of you know, was a Tuskegee Airman. He wanted to be an air traffic controller when he returned from the war, but was offered a job as an airport janitor instead. I told his story in my book and read it at his funeral.

He passed away weeks before the Tuskegee Airmen received the Congressional Gold Medal.

I think I'm going to be a mess in very short order.

Posted by Craig Hickman at 1:32 PM

Craig...
I'm not trying to be glib, but you don't think your father knows?

My parents were brutally mean when we were kids and following my mother's death in 2000, I was lying in bed that night she died and thought 'I wonder if she realizes the damage they did to us?" I don't know where it came from but it was immediate, instanteous - 'she does and she's sorry.'

I'm not a god person, Godde, G*d or whatever. I don't believe that there's some connection and whatever it is, it is powerful. Your father knows, Craig. Help him celebrate this even if he's not in our plane (dimension, iow).

We know you know all about coincidences

(I have read your book and recommend it, highly)

Wordsmith is sweet with her words and it is a great example of the idea that a coincidence is just another way of letting us know there is something real beyond earth school.

I have another for you.

A few months after my nephew Brian was killed by a motorist, I dreamed that he came to me, but did not speak. I woke up, puzzled because it seemed like he came into my dream, not that I had dreamed about him.

Anyway, I had to get ready, I had to be at the local school soon and started down the stairs when I heard music coming from our son's room.
I turned, opened the bedroom door and could still hear the sound, coming from the closet.

Before I opened the door, I paused. I recognized the tune.

When our second baby was born,Brian wanted his cousin to have his mobile, the same mobile that we had given to him seven years earlier. It was broken but the animals were especially intricate and you could see them all from a laying position. It had not played for many years.

The music mobile that had stopped playing years earlier was still playing. I just stared at it.

It played for another minute or so.
Then it stopped.

I put it back in the box, offered a little prayer of gratitude and went downstairs. I did not share what had happened, just yet.

Years later while participating in an ecumenical Lenten Study, the guest speaker was a spiritual counselor.
He also would analyze dreams. I shared the dream and what happened when I woke up.

What I did not tell him was that we had helped raise my nephew, for two years of his short life. His Mom suffered from severe depression.
Fortunately they had been reunited and had four months together he was killed.

The dream interpreter told me that the child came into my dreams and did not speak because he saw me as a mother figure and knew that I would know what to do.......

I did not know any of this at the time but I did do exactly as he wanted.
Instead of going to school that day I went to see his mother. I hesitated sharing my dream with her, fortunately she confessed that she had just been hospitalized for the same problem. I shared my dream.
She never again attempted suicide because she believed in the promise that she will see him one day, again.
That was twenty three years ago.

I never had another dream of Brian.
The power of intention?

one could argue that it had been wound too tight years earlier and it just happened to go off that morning. I believe there was more to it...

now I'm crying again
I never used to cry, only rarely...lately
i have become an expert at it :-)

Wordsmith, I'll do exactly as you suggest.

Thanks for sharing your story, em.

And by the time I finished your story I was almost bawling.

Contrasting how I felt following Bush's "reelection" in 2004 with how I feel NOW. I have no doubt we're in the hands of a capable intelligent man who talks with capable intelligent people including his wonderful wife (who I have a girl-crush on) who I'd vote for in half-a-heartbeat over BHO even.

Yeah - I don't like Rahm Emanuel. I don't care; he's not my chief of staff, he's Obama's COS. He chose him for a reason. Until he proves otherwise or I have REAL doubts, I'll trust his decisions even if I don't always agree with them.

I just know I sleep a lot better and election night was one of the first deep and restful nights of sleep since Bush has been in office, knowing the American people had awoken enough from their stupor to challenge those intent on bringing this country down.

You are very welcome, Craig :-)

I don't like Rahm Emanuel. I don't care; he's not my chief of staff, he's Obama's COS. He chose him for a reason. Until he proves otherwise or I have REAL doubts, I'll trust his decisions even if I don't always agree with them.

Wordsmith,
Thank you for your sweet sentiment

As for Rahm Emanuel. after reading about him we had an opportunity to hear him interviewed by Charlie Rose on PBS. We both liked what he had to say.
He went to Dartmouth College and comes from a family with strong moral and ethical values. If he is religious, he is grounded, having grown up in the church, I can spot a right brain thinker from a mile away..