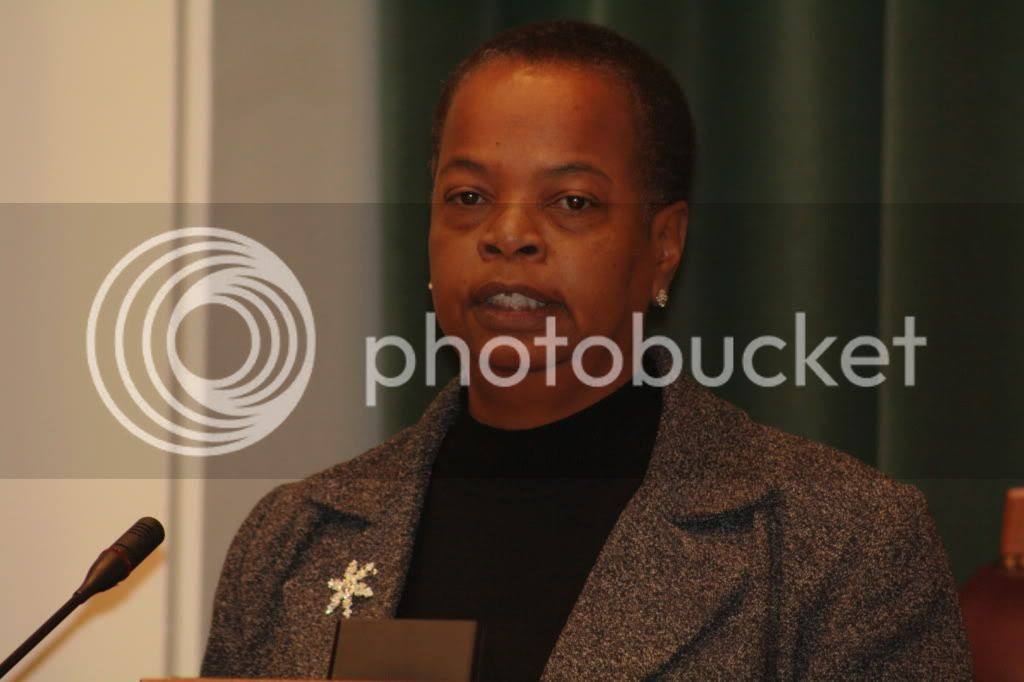 We meet today to make official, the outcome of the general election held on Tuesday, November 4th, 2008.

We members of the 2008 Maine Electoral College, thank you Madame President, Madame Speaker, Madame Chief Justice and assembled guests for your attendance here today to bear witness as we conduct this momentous task.

I thank my fellow electors for permitting me the privilege and honor of presiding over this historic gathering.

In the words of the first African American to give a keynote address to the Democratic National Convention: “Now that I have this grand distinction what in the world am I supposed to say?”, questioned Texas Congresswoman Barbara Jordan at that 1976 gathering.

I am Jill Christine Duson, a descendant of Moses Duson, husband, father and a slave on the Jones Plantation near Culpepper, Va.

Born in 1953 in Chester, Pa., I attended segregated schools until a court order required a group of 5th graders to be bussed across town to the white schools.

No one would have predicted this day, for the third of five children of a divorced mom struggling to raise a family on welfare. And now here in the Chamber of the House of Representatives of the State I have called home for 25 years, what am I supposed to say?

Zachary Walker, was the last Pennsylvanian to be murdered by a lynch mob. Next year on the 100th anniversary of his death, a marker will be placed at the site where my great grandmother’s brother was dragged and tied and set afire in full view of the citizens of his community.

Who could have predicted that his great niece would serve as the first Black Mayor of the largest city in the whitest state in America.

I am STAGGERED by outcome of the 2008 election. I am STUNNED by the overwhelming nationwide success of Barack Obama. I am UNDONE by the margin of his victory here in Maine.

We are here today to ratify that outcome, a victory for Maine, and a victory for our uniquely American democracy. And, a victory that is about so much more then Barack Obama and Joseph Biden.

Congresswoman Jordan said: “The American dream is not dead. It is gasping for breath, but it is not dead.”

The votes we cast here today will be counted in a joint session of Congress on January 6th. And on January 20th, Barack Obama will take the oath of office to serve as President for red and blue and purple America.

And, just like the incoming administration, we are challenged to transition from campaigning to governing.

Soon a new Congress will convene in Washington and in Maine we will convene municipal and legislative bodies with new and seasoned faces and diverse perspectives and concerns.

In the aftermath of the 2008 election season that energized so many, we will all be winners so long as we stay engaged.

Together we have something here in Maine that others admire. Together, we can respond to those who feel disengaged, unheard and powerless about the direction of our government, our economy and our future, with the spirit of Dirigo, I LEAD.

In so many ways Maine is indeed the way life should be. We have an environment, a people, a spirit worth nurturing and preserving.

Together we can collect and join the pieces required to realize a vision for Maine’s future that is resilient and hopeful, inclusive and doable.

I will close as I began with a quote from Barbara Jordan:

“What the people want is simple. They want an America as good as its promise.”

We four electors, look to the next four years with great hope, deep commitment and personal accountability to our democracy.

And, we say
AMEN
HALLELUJAH,
WELL DONE…
BRING IT ON

Posted by Craig Hickman at 3:13 AM

Amen hallelujah and well done to that!!