Adoptee Rights On The Horizon In Maine

AUGUSTA -- Tears came to her eyes when Lee-Ann Bragdon held up photos of her father, grandmother and great-grandmother.

Bragdon, a retired dance instructor from Windsor, and her 17-year-old daughter, Bianca Badershall, talked Monday at the Statehouse to introduce a new law that allows adult adoptees access to their original birth certificates.

Starting Jan. 2, 2009, adults who were adopted in the state of Maine will have access to their original birth certificates at the state Office of Vital Records.

Maine has joined seven other states that adopted access-to-birth-certificate laws, including New Hampshire.

Bragdon said she came to the news conference to support Original Birth Certificates for Maine, a grassroots group that succeeded in getting legislators to pass the law.

She pointed to a copied, black-and-white photograph of her grandmother holding her dad as a toddler.

"See," she said nodding at her daughter in the chair next to her. "She and my dad look almost alike. When I first tried to find him, it was for medical information. My daughter was diagnosed with a pervasive developmental disorder, which is a form of autism, but when he found out about me he said it felt like the day I was born. There was an instant bond between us."

Now he calls her every Sunday and once or twice during the week and is coming to Maine in February to meet Bradgon and her family, she said.

Benoit said the law restores rights that were taken away in 1953 when Maine passed a law requiring adoptees to obtain court orders in order to get access to their original birth certificates.

I missed the press conference. Couldn't get myself together in time to make it to the state house, but I was there in spirit.

In less than 60 days, all adopted adults in Maine who want to see a copy of their birthright, their unaltered, original certificate of live birth, will be able to do so, joining all non-adopted persons who've always been able to enjoy this right.

I've seen mine and I can say it remains one of the biggest spiritual breakthroughs of my life. 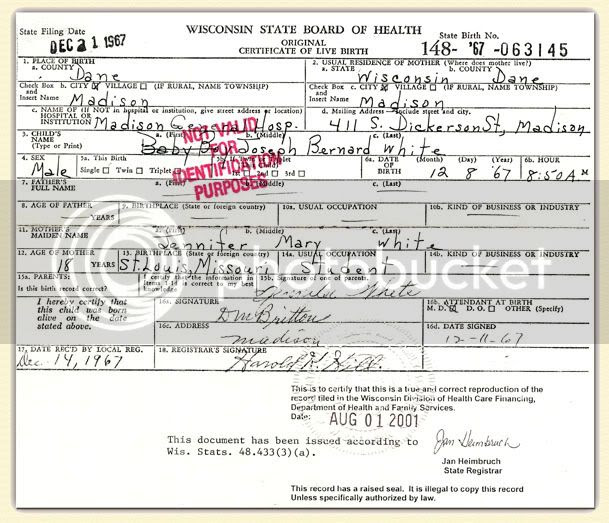 Posted by Craig Hickman at 9:30 PM