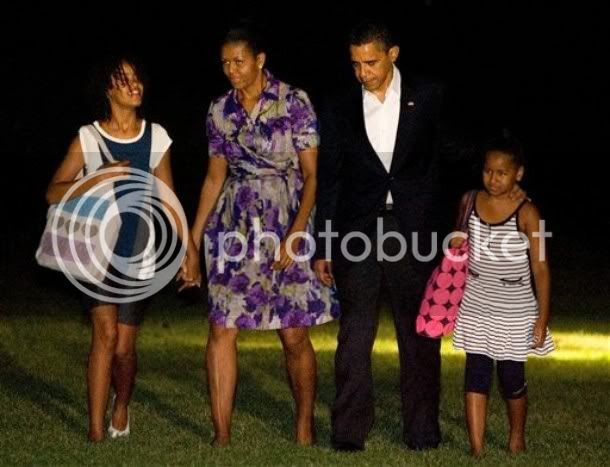 Air Force One has carried President Barack Obama and his family out of the skies of Ghana back to Washington, after a whirlwind visit to the first sub-Saharan country he has gone to since he became the first black President of the USA.

He received tremendous cheers from Ghanaians when, in a speech to Ghana’s Parliament, he acknowledged that yes, the blood of a Kenyan runs in his veins.

But I suspect that in the private apartment he and Michelle Obama shared on board Air Force One. the President would have noticed that; despite their bravery, something other than cheer was present in the psyche of his in his wife and two daughters.

Their unhappiness, not too difficult to decipher, was captured in a photograph which shows a grimfaced Obama with his arms around his eldest daughter, as they emerged from Cape Coast castle.

Why did he take them inside the castle? It is a whited sepulcher that does justice to Christ’s depiction of hypocrisy and true evil.

In there, the President and his family would have undergone the indescribable trauma of having to imagine what conditions were like on the spot where they stood, for millions of African-Americans, who were chained together in the dungeons of the castle - sometimes made to sit in their own excreta, the women washed and raped – before being shipped across the cruel sea, from Ghana to North America and the Caribbean, on a journey that took them into chattel slavery.

A chattel slavery that condemned them to endless labour, planting and harvesting cotton, tobacco, sugar and other crops, on plantations that yielded the wealth upon which the West’s prosperity and industrial might was built.

I am told by one of the Ghanaians who organized the trip for the Obamas that “in the dungeon, the tears of the President of the United States were flowing freely, Michelle Obama just broke down.

I figured the experience had taken her to the lowest point a human being can reach. The kids were asking many questions and registering the answers with shock.

It was a terribly distressing emotional moment for all of them.”

In truth, the slave trade was the most inhuman trade ever carried out in the history of mankind.

Of course, history written by westerners does acknowledge it (even if briefly} as The Atlantic Slave Trade.

But published accounts by freed slaves, such as that by Olaudo Equiano and slave-ship crewmen, such as Robert Barker, show that it was so horrible that descriptions of it were by Europeans, was either muted or suppressed..

In Cape Coast castle, everything that was bestial The Atlantic Slave Trade comes together – there is a door there labeled

“The door of No Return’, which was the slaves’ last exit from Africa.

From the forests of the African interior and the savannah, men and women who had once been the most unfettered creatures on earth, in both body and mind, were carted off to a perilous journey of no return.

At least a quarter of their number perished at sea, dying through disease and hunger, and being gifted to the fishes of the sea.

Personally, even before I heard an eyewitness account of the Obamas” experience, I just could not see how Mrs Obama, a descendant of a couple of the surviving slaves, could stand in that Door of No Return and look into it to the wide cruel sea that ate up millions of her ancestors, without needing to suppress an outflow of tears.

I haven't been able to reflect on this trip. Haven't seen the YouTube video of the President's speech to the Ghanaian parliament. The photo posted is about all I needed to keep me from going there just yet.

As I find so many insightful comments from the readers of Jack and Jill Politics, as I found the story quoted above, I've also found this:

Just thinking here: Why would the Obama's bring the girls- now? I mean anyone born of the Middle Passage, in my opinion, has to make peace with that history and visit to just acknowledge its existence. Our history books work hard to not acknowledge it. But just now, reading this piece I have have to believe that the Obama parents HAD to make REAL what their lives are committed to correcting.

It all started THERE. What they inherited (among many things,) is a legacy for Black people that goes back to the foundation of our nation. Slavery. How can they really explain the level of hate some people have for their family without going back THERE of all places. Sasha and Malia must have a foundation for understanding how their father is revered and also hated by so many people. Why there is such a fear for their little lives? They cannot do what they used to do. It is impossible not matter how hard they try.

Slavery. You can read about it, hear about it- but there is nothing like being there. You feel dread, fear, anger, sadness, and even gratitude for our ancestors who endured and willed themselves to survive. Their family made that trip together- what a blessing to get to share that moment.

I have to think this castle visit HAD to happen for their girls. This trip, this experience will truly and unequivocally unite them as a family and it will provide those beautiful baby girls a foundation for understanding the sacrifices and opportunities that will be before them.

Originally posted as a comment by evita on Jack and Jill Politics using Disqus.

I am told by one of the Ghanaians who organized the trip for the Obamas that “in the dungeon, the tears of the President of the United States were flowing freely, Michelle Obama just broke down.

Yeah..then he came out and framed the experience through the lens of the Holocaust... Does this man not have the courage to make his true feelings known?

Yeah, I found that framing a bit strange. I think there's a lot about the president you see very clearly and it's going to be interesting to see how it all plays out over the next few years.