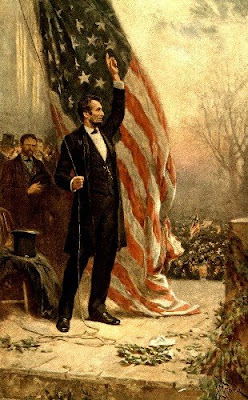 BY NOW, virtually everyone knows that Abraham Lincoln is President Obama's favorite president. He might even believe he's channeling the man. Not for nothing is he the first president to be sworn in with his hand on the Bible Lincoln used at his swearing in. According to a local news broadcast I watched last night, Fred Kaplan, the author of Lincoln: The Biography of a Writer, said that the one time he saw the then President-elect Obama, he was carrying his book around.

Today, President Obama takes a break from negotiations on the hill to observe Lincoln's 200th birthday.

While President Obama's focus will still be on the economy today, he will take time to mark the 200th birthday of Abraham Lincoln, beginning this morning when he delivers remarks at the Lincoln Bicentennial Celebration in the Capitol Rotunda.

According to the White House press office, the President will then travel to Peoria, Illinois, where he will visit the Caterpillar Plant with Sen. Dick Durbin and Transportation Secretary Ray LaHood.

Then it's on to Springfield, where President Obama will give a speech at the 102nd Abraham Lincoln Association Annual Banquet, before returning to Washington later tonight.

MSNBC reported that the President will be spending the weekend in Chicago (he's got to be jonesing for his favorite Italian restaurant, no?) not returning to Washington.

Yesterday, the AFP reported that he paid tribute to Lincoln by making a pilgrimage to the site of his assassination.

President Barack Obama made a poignant pilgrimage to "hallowed" Ford's Theatre where his political hero, president Abraham Lincoln was cut down by an assassin's bullet.

He took a three-minute motorcade from the White House to officiate at the ceremonial reopening of the theatre, after its 18-month, 25 million dollar renovation, a day before Civil War president Lincoln's bicentennial.

"Despite all that divided us, north and south, black and white, (Lincoln) had an unyielding belief that we were, at heart, one nation, and one people," said Obama, who repeatedly invoked the memory of Lincoln in his 2008 campaign.

"And because of Abraham Lincoln, and all who've carried on his work in the generations since, that is what we remain today," said Obama in remarks released by the White House.

View slideshow in full screen mode and click on view info in the upper right to see photo descriptions.

For the record, the National Association for the Advancement of Colored People (NAACP) is celebrating its 100th birthday today.