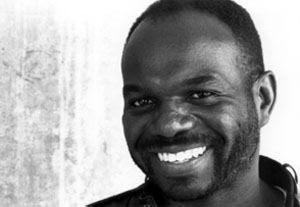 HE WAS a huge mentor. Even if he didn't know it because I never said more than hello to him at the end of a symposium he led. But his voice was clear and loud and bold and I had never experienced such an honest account of a Black gay man in a white gay world as the one he told in Tongues Untied.

Before his death in 1994, African-American filmmaker, educator and poet Marlon Riggs forged a position as one of the more controversial figures in the recent history of public television. He won a number of awards for his creative efforts as a writer and video producer. His theoretical-critical writings appeared in numerous scholarly and literary journals and professional and artistic periodicals. His video productions, which explored various aspects of African-American life and culture, earned him considerable recognition, including Emmy and Peabody awards. Riggs will nonetheless, be remembered mostly for the debate and contention that surrounded the airing of his highly charged video productions on public television stations during the late 1980s and early 1990s. Just as art-photographer Robert Mapplethorpe's provocative homoerotic photographs of male nudes caused scrutiny of government agencies and their funding of art, Marlon Riggs' video productions similarly plunged public television into an acrimonious debate, not only about funding, but censorship as well.

Riggs' early works received little negative press. His production, Ethnic Notions aired on public television stations throughout the United States. This program sought to explore the various shades of mythology surrounding the ethnic stereotyping of African Americans in various forms of popular culture. The program was well-received and revolutionary in its fresh assessment of such phenomenon as the mythology of the Old South and its corresponding caricatures of Black life and culture.

The video Color Adjustment, which aired on public television stations in the early 1990s, was an interpretive look at the images of African-Americans in fifty years of American television history. Using footage from shows like Amos 'n' Andy, Julia, and Good Times, Riggs compared the grossly stereotyped caricatures of Blacks contained in early television programming to those of recent, and presumably more enlightened, decades.

By far the most polemical of Riggs' work was his production, Tongues Untied. This fifty-five minute video, which "became the center of a controversy over censorship" as reported The Independent in 1991, was aired as part of a series entitled, P.O.V. (Point of View), which aired on public television stations and featured independently produced film and video documentaries on various subjects ranging from personal reflections on the Nazi holocaust to urban street life in contemporary America.

Tongues Untied, is noteworthy on at least three accounts. First, Riggs chose as his subject urban, African-American gay men. Moving beyond the stereotypes of drag queens and comic-tragic stock caricatures, Riggs offered to mainstream America an insightful and provocative portrait of a distinct gay sub-culture--complete with sometimes explicit language and evocative imagery. Along with private donations, Riggs' had financed the production with a $5,000 grant from the National Endowment for the Arts (NEA), a federal agency supporting visual, literary and performing artists. News of the video's airing touched off a tumult of debate about the government funding of artistic creations that to some were considered obscene. While artists argued the basic right of free speech, U.S. government policy makers, especially those of conservative bent, engaged in hotly contentious debate regarding the use of taxpayer money for the funding of such endeavors.