FIRST meets first. Portland's first Black mayor (who was also this year's Electoral College President) met with the nation's first Black president. So many firsts. So much awe.

Duson, the only mayor from Maine at the White House gathering, met with Obama briefly. She said she voiced her support for his efforts to track how the money is spent. 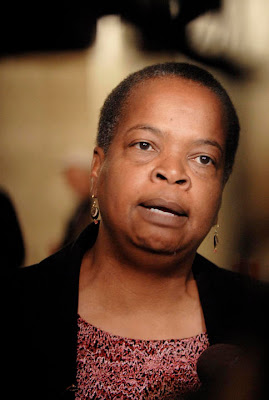 "I am personally committed to make sure that our senators – who went out on a limb for the package – can demonstrate that it was administered properly and efficiently and created jobs in the Portland region," she said in a telephone interview after the meeting.

U.S Sens. Olympia Snowe and Susan Collins were among only three Republicans to support the measure.

Maine could receive an infusion of about $1 billion from the economic stimulus bill, which Obama signed into law Tuesday. The stimulus also includes at least $262 million for education and $133 million for transportation projects in Maine.

Duson said she learned during the meeting that urban areas are eligible for additional stimulus funding for cities. She said officials in the region and the state will have to learn more about the new program and how to apply for the money.

"The Greater Portland region has a real role to play as partners with the state in terms of how these funds get into our state," she said.