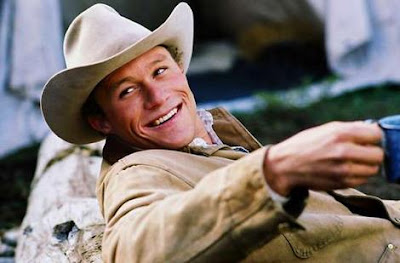 THE MORNING after River Jude Bottom Phoenix died, I had just watched three of his movies the night before. It was Halloween 1993 and I didn't feel like being wrapped up in any of that. It was at a time in my life when movies kept me company at night. When a friend called to tell me that River had been found dead, I wept. I felt as if I knew him from all the movies I had just seen.

When watching Brokeback Mountain, as brilliant as Heath Ledger was, I kept seeing River in that role. In the performance. It was as though Heatch was channeling River. And it made the movie even more poignant to me. These two men had the potential to be the next Great Actors.

I'm spent. I didn't know Heath, but having watched Brokeback Mountain more times than I can count, I feel like I did.

And to think, his character shot himself in the heart in Monster's Ball.

And to think, his last film was entitled I'm Not There.

I never saw "Broke Back Mountain". I honestly did not know who this guy really was until he had died.

That said, it is always sad to see someone with so much promise fall prey to substance abuse and not make it out alive.

I watched friends die and almost killed myself in my self made drug abuse Hell 35 years ago. I survived. Someof us do make it.

RIP Heath. It's too bad you were not strong enough or lucky enough to beat those demons eating at your soul.