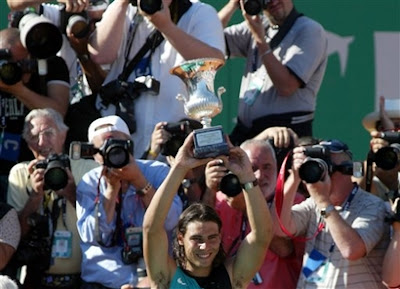 Rafael Nadal makes history. His 6-2, 6-2 thrashing of Fernando Gonzalez in the final at the Foro Italico makes Rafa the first player in history to win the Italian Open three times in a row.

Whatever happens, I wrote yesterday, I expect another war tomorrow. Silly me. I forgot that Fernando is a headcase who plays like crap in finals. After today, his career record in finals is 7-10.

Dare I say had Filippo Volandri not succumbed to Gonzo's backhand slice, we'd surely have had a more competitive final. And if not that, at least some atmosphere as the crowd tried to will their man to victory. I know. Woulda, shoulda, coulda.

Instead of a war, we got a routine, run-of-the-mill drubbing so devoid of energy it felt like a practice session.

At the end of the day, fans of Rafa and history certainly have something to celebrate.

Posted by Craig Hickman at 7:37 PM