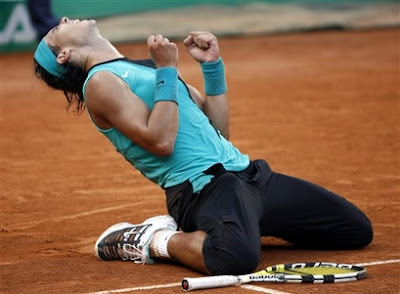 It was far from easy. But Rafael Nadal outbattled Nikolay Davydenko 7-6(3) 6-7(8), 6-4 in an 3 1/2-hour nailbiter to bring his claycourt winning streak to 76 matches. With the win, he breaks John McEnroe's 75-match winning streak on indoor carpet, and stands alone among men with the longest winning streak on a single surface in the Open Era.

This was a grueling, all-out war of attrition. Rafa was no where near his best and Kolya dictated play for most of the match with his flat deep shots that dragged the Spaniard all over the dirt. But Rafa, who arguably has the biggest heart on the men's tour, fought his nerves, his fatigue, and his relentless opponent to finally take the match on his first match point. 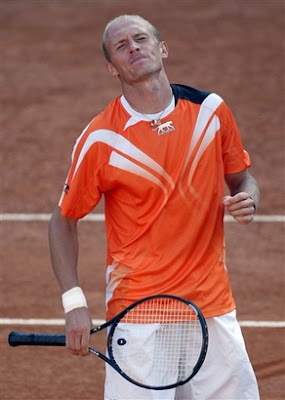 The match featured a whopping 15 breaks of serve. Nadal broke 8 times; Davydenko, 7. The Russian wasted a set point in the first set before dropping the breaker meekly, and he needed 5 set points before closing out the marathon second set. Interestingly, Rafa served for the match at 5-3 and never got to a match point, even in the 18-point tiebreak.

As did the first two sets, the third set opened with an exchange of breaks, but the first player to draw blood eventually won the set. The victory extends Rafa's record in Rome to 16-0 and sets him up to become the first player in history to win the Italian Open three consecutive times.

Posted by Craig Hickman at 9:35 PM