1
On April 11, 2001, Craig and Job loaded up their black Jeep Grand Cherokee and pulled away from their house on Ridge Street in Roslindale, a hilly neighborhood in the southwestern part of Boston. They began the thousand-mile journey to Milwaukee in search of the house on Sixteenth Street and where it might lead them. They decided to traverse Pennsylvania on Interstate 80, intending to return to Boston through upstate New York a week or so later.

When Craig woke up, they were already in Chicago. He drove the rest of the journey, while Job took his turn at sleep in the stretched-out-flat passenger seat. They arrived in Milwaukee late Saturday morning and tired as a mule, Craig drove by Sharon Seventh-Day Adventist Church on Teutonia Avenue on Milwaukee’s north side. Services had just ended and Craig wondered if any of the people, clad in white and pastel Easter raiment posing in front of the church, were his relatives.

“C’mon, honey. Let’s just get to the hotel. I need to stretch all the way out,” said Job, awakened by the slow tempo of the car as they passed the church.

“I’m so tired I could fall out, but I wanna drive by the house first. It’s only a few blocks from here. After that, I promise, we’ll go to the hotel. It’s a quick dash downtown on the highway.” Craig drove about half a mile up Teutonia Avenue, turned right onto Burleigh Street and left onto Sixteenth. Almost at the end of the block on the right side of the street sat 3232, the house with white siding and green trim. 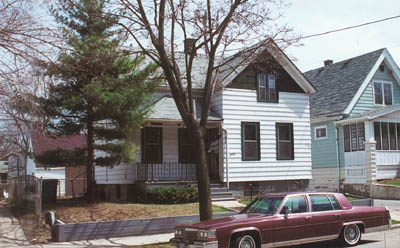 “It looks like your parents’ house, Craig,” said Job as they pulled up. Craig stopped in the middle of the street. “It’s smaller because it’s a single-family, but it’s just like your house. Same color and everything. The only thing missing are the pine trees.”

“Surreal.” Craig looked in the rearview mirror and saw no car coming behind them. “Take a picture.”

Job retrieved the Canon from the camera bag, rolled down the window, and snapped two photographs. Craig tried to imagine the family that had lived behind the front door thirty-three years before, but nothing came into view. He sighed and pulled away as Job put the camera back in its case.

Craig drove downtown where they checked into the Hotel Wisconsin, one of the city’s oldest. It was the same hotel where Craig once met a man whose number was written neatly on the stall of a bathroom in the Grand Avenue Mall, which stretched for three blocks right across the street.