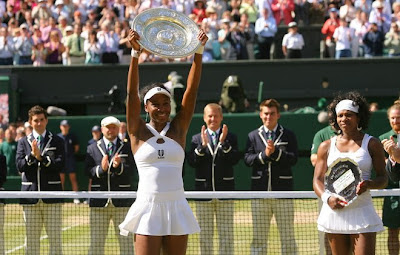 And she finally beat Serena Williams again in a Slam final. After losing to Serena in five Slam finals, four of them in a row, it was clearly Venus' turn to get some revenge and take another title over Serena, her first since the 2001 US Open.

This is the third time in Venus' career that she defended a Slam title. She's now tied with recently "retired" Justine Henin with seven Slams, one shy of Serena, who remains the only active player to have won all four Slams.

You can read our takes on the match in the Open Thread. 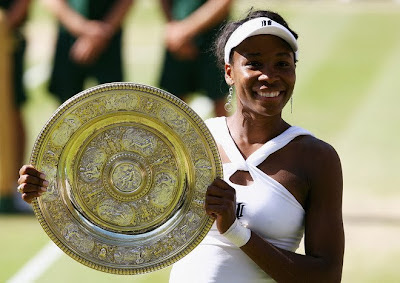 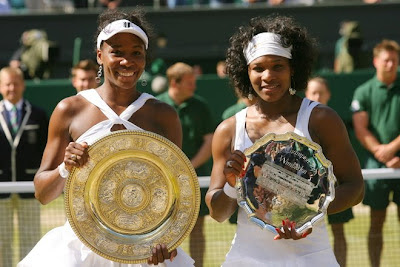 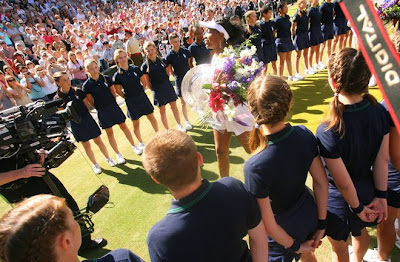 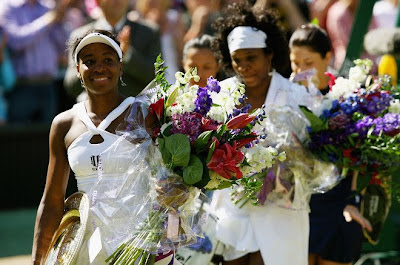 Venus followed up her singles championship victory with a 6-2, 6-2 victory in doubles alongside sister Serena over Lisa Raymond of the United States and Samantha Stosur of Australia. 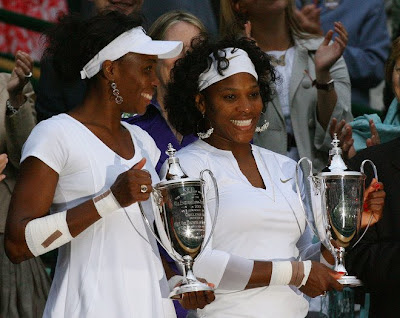 Virginia Wade, my favorite commentator, said that of all the doubles matches featuring Serena and Venus that she has seen, this was the first match where they played pure doubles as a team rather than scintillating singles tennis on a doubles court.

Quite a feat only hours after the grueling emotions of a Slam singles final against each other.

This is the third time, 2000 and 2002 previously, that they've won the doubles title. All three times, one of them has also won the singles title.

If theirs isn't among the greatest stories in the history of the sport - of all sports - I don't know what is. 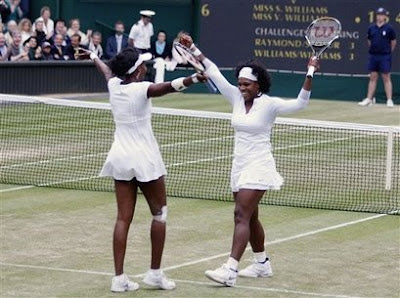 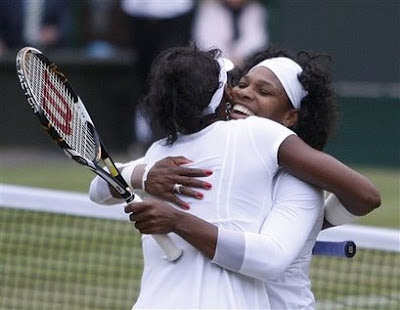 Posted by Craig Hickman at 5:02 PM

We Watched the game this morning!

What an exciting game, after more than twenty years away from this sport, to watch the Williams sisters, show reverence to one another as well as respect for the game,
we offer another point to view:


Craig said,
"The match just got weird as they approach the end of the first set.


Right around this time we offered up a prayer for Venus, that this day be hers with her sister's blessing. As a younger sister, that is what I would do.
In classic Williams form, when asked about her feelings right after her win, Venus said, "First, I am a big sister".

From our living room, Serena did not show anger. She perhaps was a little hard on herself, not understanding why she hadn't made a stronger fight for the win, but her soul
had already made peace with her decision to defer to her older sister, Venus.
Love is stronger than sport, this was Venus's day.

Since we barely follow tennis, our two cents is worth just that; on the other hand, we frequently follow family love...

::
I will never forget this day. Tennis does not get any better than this!!!
Now, if our country could adopt even a cupful of the Williams' spirit - oh, happy days!