An American in Paris: A President's Welcome 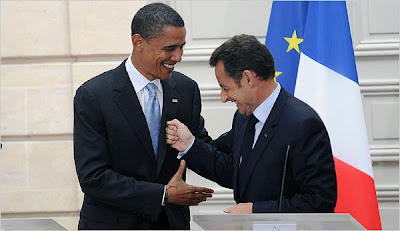 TODAY, French President Nicolas Sarközy threw himself all over Barack as though he was his lover. And I'm not overstating. Not that he doesn't like Barack. Clearly he does. You can't fake chemistry. But I have to think he's playing politicsjavascript:void(0)
Publish Post with his own electorate, which really likes Barack. I wonder what Sarközy's approval ratings in France are right about now. 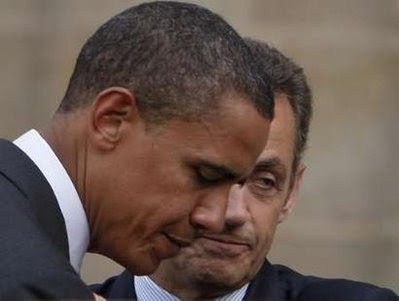 Whatever the case, Sarközy treating Barack as though he were the sitting President of the United States. Not only did they have a meeting, as Barack did with other heads of states, but he hosted a joint press conference outside the Élysée Palace before international media.

When John McCain visited, he spoke there alone. 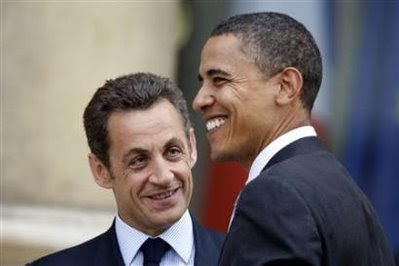 Unprecedented. Aware of the atmospherics and protocol of it all, Barack demanded that no American flag stand behind him since onlyl sitting Presidents and military can represent the American flag abroad. 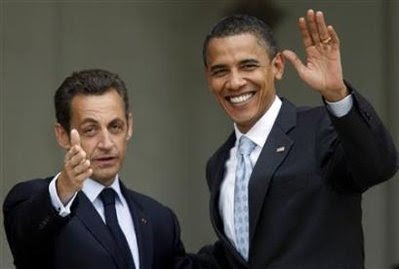 The press conference was stunning. My mouth agape from the first tough question to the last. And both men's answers were as tough as the questions.

Sarközy gave Barack a president's welcome. Barack took it and ran with it, but all the while remaining aware that one false step over a very thin line, and he'd fall flat on his face.

He danced on that line like Bill T. Jones.

Posted by Craig Hickman at 7:25 PM

I love this post Craig. I get tired of all the old woman hand wringing of some folks because Obama is "arrogant."

Give me a friggin' break. He's a Grown Ass Man who knows who he is. That's self-knowledge and more people should embrace it. A Black Man can't love and accept who he is?

The nonsense must stop.