Notes On A Scandal 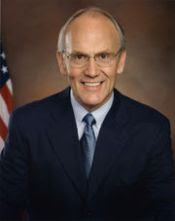 But as a man who has had public sex, the cops are the problem here, not the men who seek sex in public places.

There is no such thing as public sex - whether it be in a restroom, at a reststop, under a bridge, behind a building in the wee hours of the morning, in the dunes at the beach, on a tree-lined hill in a park - without consent. No. Such. Thing. Men who have no interest in it are neither harassed nor molested by anyone because they wouldn't pay any attention to the subtle mating call - a foot tap, a cough, the no-sound of liquid or solid excrement falling into a toilet after 15 minutes in the occupied stall next to you - of another man well-versed in the nuances of public sex.

Cops who entrap men have to do something within that unwritten code of conduct to get the "criminal" to make an advance. And an advance, in and of itself, isn't criminal behavior, people. There is no law anywhere against cruising an attractive person, no law against stepping back from a urinal to expose your entire cock at someone who's staring at it, no law against tapping your foot on the floor of a stall or gesturing your call-and-response with a wave of the hand under a stall divider.

But don't you know that all the police who operate these stings are also participants in public sex when off the clock? How else would they know the codes? They are no less hypocritical than Craig himself. You see, when the guilt and shame of last week's blow job in the park haunts them, they return to the scene the next week with handcuffs and badges, entrap and arrest another man as a way to lock up their own guilt and shame and put it where it belongs.

But in trying to rid their guilt and shame, they also ruin someone's life. I've seen men hang themselves after their names have been printed in the paper over a sting in a bathroom at a college campus. And make no mistake, I have no sympathy or respect for hypocrites like Craig who publicly hate queer people and who, like the cops, also have the power to ruin our lives. But the quiet and upstanding high school teacher who decides his wife and children are better left alone because he can't face himself after being exposed and decides to leave this world are the ones who pay the biggest price for this exercise in futility:

Homosexuality cannot be codified out of existence. Men will continue to seek and have sex with other men in public places all over the globe no matter how many hypocrites try to stop them. And they're not hurting anyone.

The cops need to be taken to task for their own bullshit in all of this.

You'd think they have bigger fish to fry.

But guilt and shame are whales.

Related Articles
America's Toe-Tapping Menace
In the Age of Terror, Isn't Busting Toe-Tappers an Insane Use of Our Law Enforcement Resources?
Posted by Craig Hickman at 3:26 PM

Human beings are so sadly ritual and tradition oriented. Most don't realize we don't have to fuck or love a particular way. If those salmon who swam upstream by instinct following the rest aka parents didn't do it or tell them about it or show then what to do, many have a hard time envisioning a life choice that offers other possibilities. It's terrifying to see how this plays out and seeing what lengths people will go to to pretend that they are doing just like the rest of the salmon. Sad and pathetic. Unnecessary oppression perpetuated.