The Booklet for Daddy's Farewell

HE CAME TO ME in a dream. I was taking a nap a few days ago in the middle of the day. My body was stiff as a board. I seemed to be in that no-place between sleep and awake. I was aware that I couldn't move.

Daddy was telling a story to my beloved. They were both laughing. I heard Daddy's voice, but not his words. I kept trying to reach out and touch him, but my body was stiff as death. I heard myself say, "Keep talking, Daddy. Keep talking." A few minutes later, my bladder filled up and I rose to go the bathroom.

That was the second visitation. The first came when I was riffling through Mama's extensive collection of photographs to chose the ones for his funeral program. Sitting on the couch up front, snapshots spread all over the cocktail table, I looked up and saw his silhouette in the door to the dining room. He walked toward me, a smile on his face, and sat down in the overstuffed green chair under his wedding portrait. Seconds later, the apparition vanished.

The program booklet turned out beautifully. Click on each panel to see actual size. 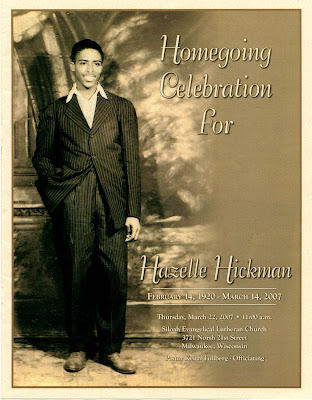 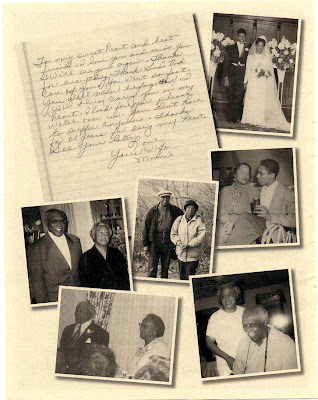 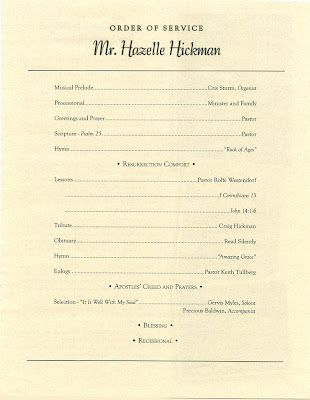 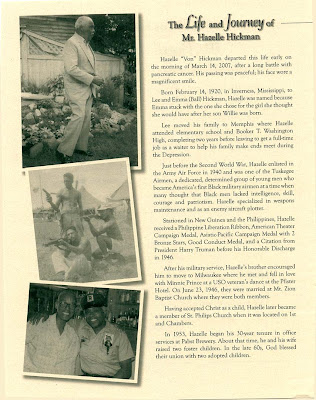 Obituary, Page 1: Daddy sings "Ebb Tide," my favorite song, his too, at my wedding, August 22, 1998; Daddy during the Second World War - the back of the photo reads: "M. Boone, H. Hayes & myself on Guadalcanal" in Daddy's perfect penmanship; chilling with a Pabst and a shot of brandy in his basement barroom after a day at the brewery with Catfish, his lifelong friend, late 1970s. 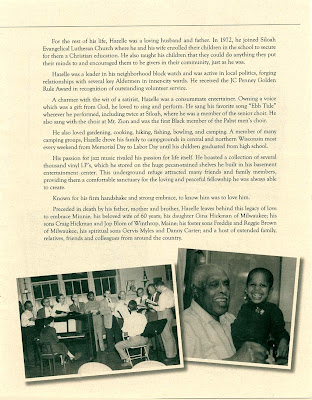 Obituary, Page 2: Singing with the Pabst men's choir, the first black man to do so, 1954; Singing to Sauvignon, my biological nephew, Memorial Day weekend, 2002. 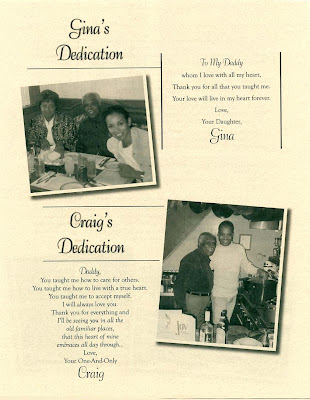 Children's Dedications: At a family restaurant in Milwaukee, summer 1997; At my Viking stove stirring a pot of gumbo in Maine, Christmas 2002. 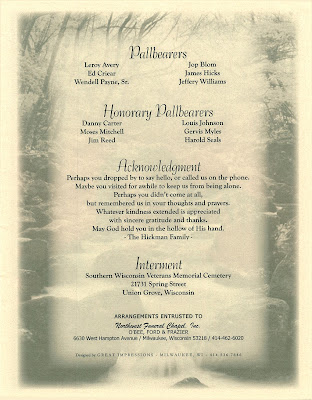 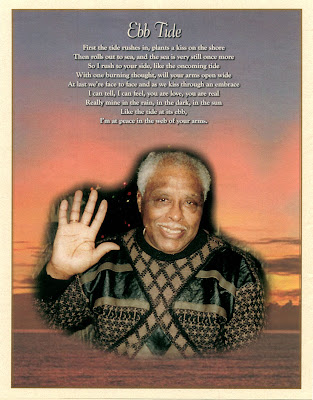 Back Cover: Goodbye, Daddy. You're at peace in the web of His arms.

Posted by Craig Hickman at 8:53 AM