The Day I Became My Father's Son

I HATE SHOPPING. If there were a way to go into a store and have everything you want or need, in your size, of course, laid out before you just inside the threshold of the door for you to pick and choose from, perhaps I'd enjoy it more. But, no. That would be utopia. I like to spend as little time in stores as possible, especially when shopping for clothes.

Today, I decided it was time for some new jeans. So I drove over to Gap at the nearest strip mall (welcome to small-town America) and began the tedious task. All Gap jeans had a 1969 label attached to the back of the waistband. I didn't bother to ask the salesperson if that was the year Gap was founded, but I figured as much. I knew that 1969 was the year I became a Hickman, 16 months after being placed for adoption as a 5-day old baby.

After I purchased my two pair of jeans, I felt weak. I wasn't in the store for long at all, but it seemed to have drained all my energy. A doctor's visit beforehand revealed that I was slightly anemic, so I decided to head on over to Longhorn Steakhouse and have some iron-rich red meat for lunch. I don't usually eat red meat, but, hey, I don't buy Gap jeans either.

While waiting for my petite filet and broccoli to arrive, I jumped back into the The Girls Who Went Away. I started reading the last chapter when it dawned on me that today is April 27. Within seconds, my head drooped and I was sobbing.

Today was the day I became my father's son. 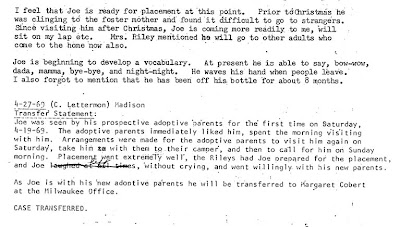 On April 27, 1969, I went permanently to the home of Hazelle and Mary Juanita Hickman on 13th Street in Milwaukee, Wisconsin. It was then that I became my father's namesake as well. In a sense, anyway. You see, my mother named me Craig, which means "rugged rock," and my father named me Von, which means "from," after a nickname that he'd been given by a friend down at Pabst in the early 50s. He didn't have a middle name, even though he was often called Von Hickman (we were known as the Vonhickmans to many families in our camping group) so he officially gave me his nickname as my own. Craig Von Hickman. Craig from Hickman. Rock of Daddy.

Today, I don't feel like a rock. But on this day 38 years ago, I became my father's son.

I think I'm going to have a Pabst and a shot of brandy to celebrate. Daddy and I at a farm in Horicon, Wisconsin, where we often went camping.

Posted by Craig Hickman at 5:38 PM