Hickman in the Electoral College 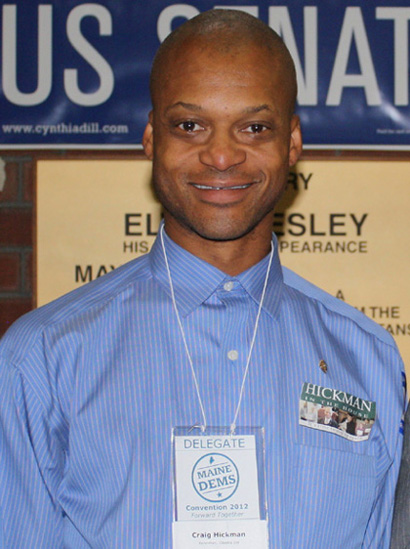 WINTHROP — Craig Hickman, vice chair of the Winthrop Democrats and two-time candidate for the Maine House of Representatives, was elected as one of Maine’s Democratic Presidential Electors at the party’s state convention this past weekend. The state delegation also elected Diane Denk of Kennebunk, Jill Duson of Portland, and Marianne Stevens of Kingfield to fill out the slate of the party’s four Electors.
“It’s taking me a long time to wrap my mind around it all,” said Hickman. “I’m humbled to have been chosen for this great, great honor. As a member of the Electoral College, my name—my father’s name—will be etched in history. Somewhere in heaven, my father is dancing a jig.”
Eight Winthrop delegates joined Hickman and about 1,500 delegates from around the state at the Augusta Civic Center to settle on a platform, choose delegates to the Democratic National Convention on Labor Day weekend in Charlotte, North Carolina, select Democratic electors to the Electoral College, and elect Maine representatives to the Democratic National Committee. Rita Moran, chair of the Kennebec County Democratic Committee, was elected to the national delegation, as was Hickman. Both were delegates to the national convention in 2008 as well.
This was the first time Hickman ran for Presidential Elector. “Four years ago, I witnessed Maine’s Electors cast their votes in a historic ceremony at the State House,” he said. “Jill Duson, the first black mayor of Portland, addressed the convention. I was so inspired I told myself I wanted a chance to do that someday. Now, I’m one step closer and I can hardly believe it.”
According to Article II, Section I of the United States Constitution, along with the 12th Amendment and Maine statutes pertaining to presidential elections, voters will elect Maine’s Presidential Electors in the November general election. Electors then convene on December 18th at 2:00 pm in the Maine House Chamber to cast their votes for President and Vice President of the United States. The ceremony is open to the public.

Read your profile & comments in the Maine Sunday Telegram this morning. Loved your approach to where we (ME) need to place our attention. And, I'm also pleased you are Vice Chair of the Winthrop Dems, and now going to the Convention!

Then I visited your blog: Fumbling Toward Divinity. Wonderful! I signed up! Your story of seeing your father "comin down the road," struck a cord! Who knows what, if anything is in store for all of us after we pass on, but, why not just "go with" what comes our way and see where it leads us.

THANKS FOR STEPPING UP TO THE PLATE . . . RUNNING FOR OFFICE (and for spreading the word of the importance of good, fresh food grown locally!)

All the best
Alex