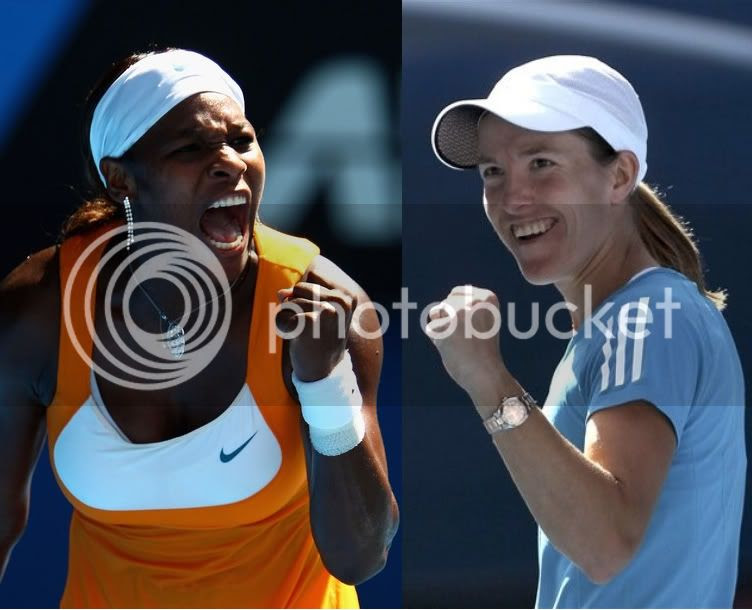 The Australian Open organizers couldn't have written a better script. In the first Slam final of the new decade, 11-time Slam champion Serena Williams, world No. 1 and defending champion, will face off against 7-time champ Justine Henin, the 2004 champion playing in only her second event since abruptly and mysteriously retiring from the tour as world No. 1 -- the only player in history to do so -- 20 months ago.

There's mutual respect and a few vials of bad blood. Henin will never be able to live down her infamous hand shenanigans in the Roland Garros semifinal, which ultimately cost Serena the match and a chance to defend her first Roland Garros title. And after a string of successive defeats in the quarterfinals of Roland Garros, Wimbledon and the US Open in 2007, Serena virtually ran Justine off the tour with a 6-2, 6-0 beatdown in the quarterfinals of Key Biscayne in 2008.

A few weeks ago, when the Sydney draw came out, Serena and Henin were to face off in a potential second-round encounter. But Henin withdrew citing injury. She had just completed a grueling three-set final against her Belgian rival Kim Clijsters in the Brisbane final, so the tennis world would have to wait to see these mulitple Slam champions go at it.

Didn't have to wait too long. Some are calling it a dream final, others a cat fight. Based upon the player's current form, the encounter could be over in an hour. Serena's serve and return are the key. As much as Henin fights, her serve hasn't held up well throughout the fortnight. But her opponents haven't been able to fend off her aggressive return game to hold their own serves.

Serena went through four rounds without dropping serve and it wasn't until nerves overcame her at the outset of her quarterfinal encounter against Victoria Azarenka that she finally surrendered a service game. Several of them. But if she's comfortably holding serve -- she's served the most aces (53) and clocked the fastest serve (126.7 MPH) through 6 rounds -- and breaking serve at will, Henin won't win a set.

But Serena is trying to defend a Slam title for the first time since Wimbledon 2003. And while she asserted in a presser that she doesn't enter events to defend titles but to win them, I can't imagine some nervous pressure won't leaden her feet in the first few games of the match.

Henin, who recently admitted being afraid of playing Serena, could play with nothing to lose or as anxiously as she did against Elena Dementieva in the second round. Either way, her second serve is a wasteland and her penchant for double faulting at the crucial junctures of a match could be her undoing. However, if she's cracking forehand winners with that shorter backswing and earlier contact and wearing Serena down with dropshots, she could take Serena the distance.

ESPN will air the finals live at 3:30AM eastern standard time. Take your naps, set your alarms, prepare the popcorn and get ready for the fireworks.

Posted by Craig Hickman at 5:28 PM