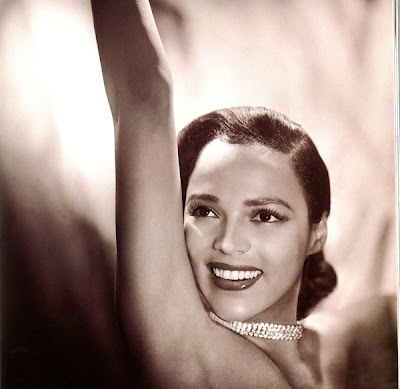 DOROTHY Jean Dandridge (November 9, 1922–September 8, 1965) was an American actress and popular singer. Dandridge was the first African American to be nominated for an Academy Award for Best Actress.

Dandridge was born in Cleveland, Ohio to Cyril Dandridge, a cabinetmaker and minister and Ruby Dandridge (née Butler), an aspiring entertainer. Dandridge’s parents separated shortly before her birth. Ruby Dandridge soon created an act for her two young daughters, Vivian and Dorothy, under the name of “The Wonder Children.” The daughters toured the Southern United States for five years while Ruby worked and performed in Cleveland. During this time, they toured non-stop and rarely attended school.

With the start of the Great Depression, work dried up, as it did for many of the Chitlin’ circuit performers. Ruby Dandridge moved to Hollywood, where she found steady work playing domestics in small parts on radio and film. “The Wonder Kids” were renamed “The Dandridge Sisters” and booked into such venues as the Cotton Club and The Apollo Theater in Harlem, New York. Dandridge’s first on-screen appearance was a bit part in a 1935 Our Gang short. In 1937 she appeared in the Marx Brothers feature A Day at the Races.

In 1940, Dandridge played a murderer in the race film Four Shall Die. All of her early parts were stereotypical African-American roles, but her singing ability and presence brought her popularity in nightclubs around the country. During this period, she starred in several “soundies”, film clips designed to be displayed on juke boxes, including “Paper Doll” by the Mills Brothers, “Cow Cow Boogie”, “Jig in the Jungle”, “Mr. & Mrs. Carpenter’s Rent Party.”

Carmen Jones grossed $60,000 during the first week and $47,000 in the second upon release in 1955.[citation needed] The film received favorable reviews, and Dandridge was nominated for an Academy Award for Best Actress, becoming only the third African American to receive a nomination in any Academy Award category (after Hattie McDaniel and Ethel Waters). Grace Kelly won for her performance in The Country Girl. At the ceremony, Dandridge presented the Academy Award for Film Editing to Gene Milford for On the Waterfront.

Posted by Craig Hickman at 5:01 PM

Your web site is outstanding!

Here is the url of the blog from the Archives of the Sandusky Library, if you would like to take a look: