Black Out in New York City 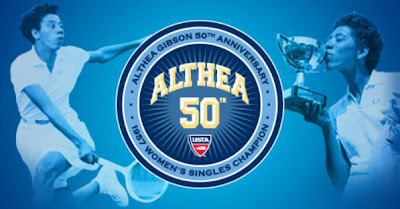 Althea Gibson who won the US Nationals in 1957, becoming the first Black person with what became the US Open, gets her just due in a moving tribute on Arthur Ashe Stadium tonight. We got on Wimbledon for not giving Althea her due this year, but she actually won Roland Garros in 1956 to become the first Black person to win a Slam and her anniversary last year was overlooked by all. Still, better late than never.

The telecast opened with Serena and Venus Williams in giving props to Althea. A Black hero. A woman's hero. A tennis idol. Goosebumps. 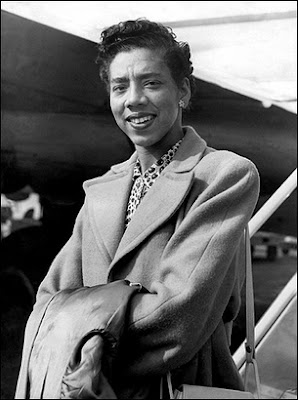 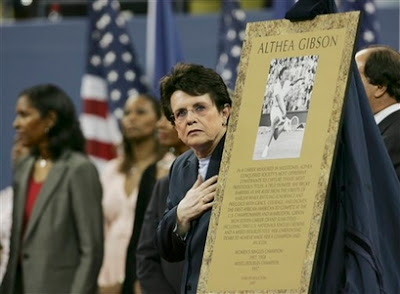 Billie Jean King, who received her own tribute last year whe the USTA Tennis Center was renamed in her honor, holds a plaque honoring Althea in the opening night ceremony. Althea was officially inducted into the US Open Court of Champions. She died broke in 2003. Too bad she wasn't around to experience all of this. Better late than never. 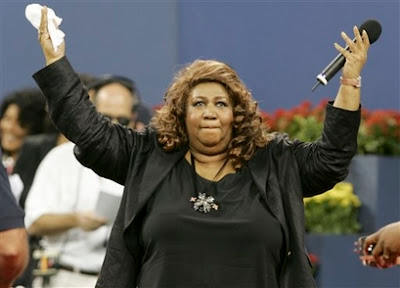 Aretha Franklin holds her arms aloft after putting down "Respect" for the rapt audience.

Janet Jackson takes it all in from the Williams family box. 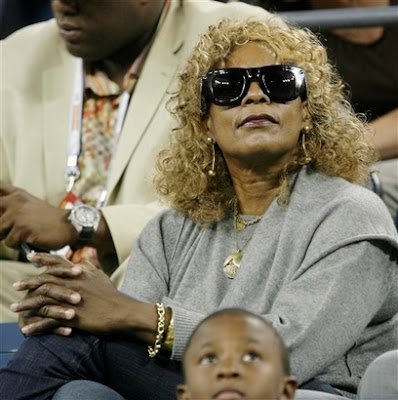 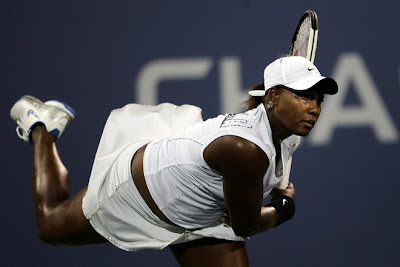 Miami native Ahsha Rolle musta felt the love. She upset No. 17 seed and 2006 quarterfinalist Tatiana Golovin of France 6-4, 1-6, 6-2 for her first win in Flushing Meadows. 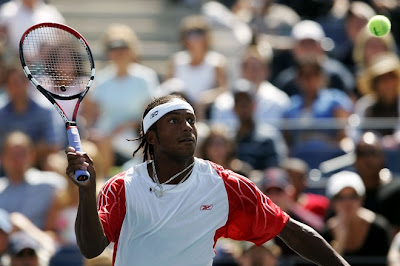 Qualifier Scoville Jenkins isn't so lucky. He falls to Roger Federer 3-6, 2-6, 4-6 in his first round, bringing his US Open record to 1-3. Apparently, he was out of the game for a while with a wrist injury that forced him to wear a cast. He has enough talent to be a decent professional player but I still feel that before his injury he got too little help from the USTA. Perhaps his name and his cornrows aren't helping his cause. Just sayin.

Serena closes out the night, shaking off some rust, and subdues hard hitting lefty Angelique Kerber of Germany 6-3, 7-5. Serena gives the thumbs up after the match. She hit her backhand well. No sign of injury. Great sign moving forward.
Posted by Craig Hickman at 11:59 PM

Dear Sir,
I found your bog, by searching for others who enjoys Alice Walkers masterpiece "The Temple of My familiar", and low and behole I found you! I've been looking for somone of your beingness for so long, we share many things in common, of which we can talk more about in time to come, please visit my Blog if you have the time! my email is gregorybourgoin@hotmail.com
I'm also Living in New Brunswick, which is not too far from you I think! Be safe dear friend and keep up the wonderful work you are doing, you're such an inspiration!
gregory