Angels Watching Over Me 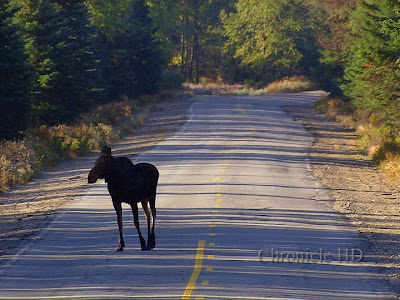 ON MY WAY HOME from Bangor last night, my life flashed before my eyes. I wish I could say I was being melodramatic. But I can't.

Headed south on I-95 and pushing the speed limit, as I am wont to do, a huge moose or deer—it happened so fast, it was dark and I couldn't be sure which it was (all it know is that it was huge and it was coming right at me)—lunged across the highway just as I was speeding by. Had I been driving a single mile per hour slower, it would have crashed directly into me.

As it was, it slipped behind my truck crossing just before the next truck—the image in the my rearview mirror of its legs galloping before the truck's headlights indelible in my brain—and into the woods along the outside of the highway.

Whew. After my stomach backed down from my throat, I immediately called my husband. I thought of my mother. She called me on Father's Day. Grieving, too, of course, she realized it would be a harder day for my sister and me than for her. Oh, how she gets it. Oh, how blessed am I. No way, no how would she deserve a bad news phone call.

I spoke to Frank on Father's Day as well. My husband and I had actually met him on Father's Day for the first time back in 2001 when I located my birth family. We exchanged family stories a terminal of Fort Lauderdale-Hollywood International Airport. First time I saw a man in person who looked just like me. Legs bowed wide enough to throw a basketball through.

I'm not close to him, we don't really see each other at all. But we love each other from a distance and he's a real cool kat. He calls me his special son. He's got more of those than you can count on two hands. And those are the ones we know about.

I'm honored to be his special one.

But this Father's Day felt different. As much as I wanted to talk to Frank, I had an uncomfortable feeling in the pit of my stomach. As though I was only supposed to be mourning Daddy and not talking to my birth father.

Just when you think you've resolved everything.

Bu that gigantic creature galloping cross the highway last night brought me back to what's real. Love is all that matters. Everything else is noise.

Posted by Craig Hickman at 2:00 PM

Wow, what a story! You sure have an angel watching over you!

You are very blessed with your mom, in spite of her own grieve she thinks about yours and especially on fathers day.

OMG.....talk about life flashing by....must have been an aweful experience! I'm happy my uncle is ok!