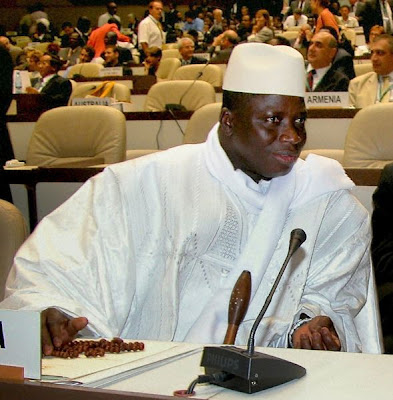 Gambian President Yahya Jammeh says he will “cut off the head” of any homosexual caught in his country.

Addressing supporters at the end of his meet the farmers tour here Sunday, Jammeh also ordered any hotel or motel housing homosexuals to close down, adding that owners of such facilities would also be in trouble. He said the Gambia was a country of believers, indicating that no sinful and immoral act as homosexual would be tolerated in the country.

He warned all homosexuals in the country to leave, noting that a legislation “stricter than those in Iran ” concerning the vice would be introduced soon.

President Jammeh said he was bent on making the Gambia one of the best countries to live in, adding that his government had spent over US$ 100 million towards the development of the country since 1994.

I'm too outraged to even make a coherent thought. No surprise he's in bed with the leaders of Iran.

All I can do, for now, is pray for those whose lives are threatened simply because of who they are.

Posted by Craig Hickman at 3:52 PM

Hey Craig,
I have been out of town of late.
I just listened to Obama's speech in Iowa (you posted) it is hard not to feel good about the future of America! Obama's straightforward talk is so refreshing I had to listen to it twice over, just to re-aquaint my ears to power in truth!!I also want to thank his dear wife, Michelle, because she is one gracious women, sharing her man with the United States and the world. We are in for many hours of enjoyable news conferences by Obama. Maybe he will re-introduce the "fireside chat" that Americans so enjoyed with President Roosevelt.

Then I read the headline on what President Jammeh promises to do to gays and my heart sank to a new low. I wish I could say that he does not represent the people in Africa but apparently he is not alone in his belief that homosexuality is wrong.

Our own General Conference for the UMC was a disappointment this year for my brother in law, Scott and many others when they met in Texas a few weeks ago. The UMC has gone from very progressive to having the African delegates represent church members who believe homosexuality is a sin no matter how progressive the pastor may be. They have to deal with the people back home, which is having a negative affect within the US.
Scott had prepared legislation that would further the inclusive language and position of the gay community. The minority report was executed by the new group of UMC delegates (a group of members who have joined our church in order to take it back from the progressives). They claim, that we somehow took it from them? Anyway, through some clever parliamentary manipulation, their regressive minority report agenda held the floor long enough to delay vote on the new legislation, which forced it to be tabled until the next general conference in 2012.

A little history - we did split from the Methodist Church when the Black Churches were not allowed to participate in our General Conference (Southern) so we split, joined with the southern Black Methodist and became the United Methodist Church. The only reason this group is trying to split us now is because we have grown in power and wealth to the second largest protestant church and are very progressive.
That makes them very angry and they have done some pretty unethical things to try and split us- to no avail.
That said, I am sorry you and all the rest of us had to read this headline and have to wonder if we should consider this threat against humanity enough to take action against a leader who would advocate death to innocent people? Talk about Human Rights violation!

The newspaper you linked to this article had a lot of interesting articles on the subject at hand
if you follow the articles under religion.

I enjoy your posts, even if I do not get to comment on them. Thanks, Craig :-)


We all get it in the end!
Hope knows