"Strange Fruit" was a poem written by Abel Meeropol, a Jewish high-school teacher from the Bronx, about the lynching of two black men. He published under the pen name Lewis Allan.[3][4]

In the poem, Meeropol expressed his horror at lynchings, possibly after having seen Lawrence Beitler's photograph of the 1930 lynching of Thomas Shipp and Abram Smith in Marion, Indiana. 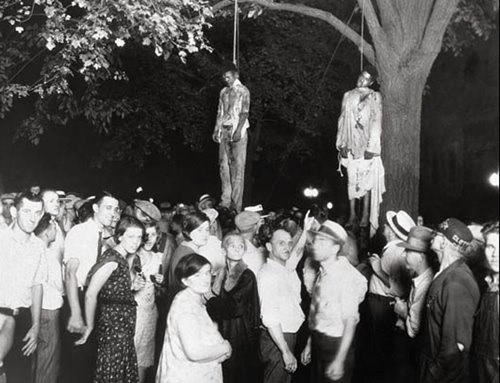 He published the poem in 1936 in The New York Teacher, a union magazine. Though Meeropol/Allan had often asked others (notably Earl Robinson) to set his poems to music, he set "Strange Fruit" to music himself. The piece gained a certain success as a protest song in and around New York. Meeropol, his wife, and black vocalist Laura Duncan performed it at Madison Square Garden.[5] (Meeropol and his wife later adopted Robert and Michael, sons of Julius and Ethel Rosenberg, who were convicted of espionage and executed by the United States.)[6]

Barney Josephson, the founder of Cafe Society in Greenwich Village, New York's first integrated nightclub, heard the song and introduced it to Billie Holiday. Holiday first performed the song at Cafe Society in 1939. She said that singing it made her fearful of retaliation, but because its imagery reminded her of her father, she continued to sing it. She made the piece a regular part of her live performances.[7]

Holiday approached her recording label, Columbia, about the song, but the company feared reaction by record retailers in the South, as well as negative reaction from affiliates of its co-owned radio network, CBS.[8] Even John Hammond, Holiday's producer, refused. She turned to friend Milt Gabler, whose Commodore label produced alternative jazz. Holiday sang "Strange Fruit" for him a cappella, and moved him to tears. In 1939, Gabler worked out a special arrangement with Vocalion Records to record and distribute the song.[9] Columbia allowed Holiday a one-session release from her contract in order to record it.

She recorded two major sessions at Commodore, one in 1939 and one in 1944. "Strange Fruit" was highly regarded. In time, it became Holiday's biggest-selling record. Though the song became a staple of her live performances, Holiday's accompanist Bobby Tucker recalled that Holiday would break down every time after she sang it.[citation needed]

In her autobiography, Lady Sings the Blues, Holiday suggested that she, together with Lewis Allan, her accompanist Sonny White, and arranger Danny Mendelsohn, set the poem to music. The writers David Margolick and Hilton Als dismissed that claim in their work, Strange Fruit: The Biography of a Song. They wrote that hers was "an account that may set a record for most misinformation per column inch". When challenged, Holiday—whose autobiography had been ghostwritten by William Dufty—claimed, "I ain't never read that book."[10]

Barney Josephson recognized the power of the song and insisted that Holiday close all her shows with it. When she was ready to begin it, waiters stopped serving, the lights in club were turned off, and a single pin spotlight illuminated Holiday on stage. During the musical introduction, Holiday would stand with her eyes closed, as if she were evoking a prayer. Numerous other singers have performed the work. In October 1939, Samuel Grafton of The New York Post described "Strange Fruit": "If the anger of the exploited ever mounts high enough in the South, it now has its 'Marseillaise'."


When I stumbled upon this website, I was floored.

Searching through America's past for the last 25 years, collector James Allen uncovered an extraordinary visual legacy: photographs and postcards taken as souvenirs at lynchings throughout America. With essays by Hilton Als, Leon Litwack, Congressman John Lewis and James Allen, these photographs have been published as a book "Without Sanctuary" by Twin Palms Publishers . Features will be added to this site over time and it will evolve into an educational tool. Please be aware before entering the site that much of the material is very disturbing. We welcome your comments and input through the forum section.

Experience the images as a flash movie with narrative comments by James Allen, or as a gallery of photos which will grow to over 100 photos in coming weeks. Participate in a forum about the images, and contact us if you know of other similar postcards and photographs.

Recently a close friend of mine who grew up in Maine, who had never heard of lynching, spontaneously burst into tears when I described this horror of our nation's past over lunch. The detail that seemed to get to him most were the postcards sent around inviting people to the well-attended lynching parties.

I recommend viewing the flash movie option above. The commentary elicits chills. 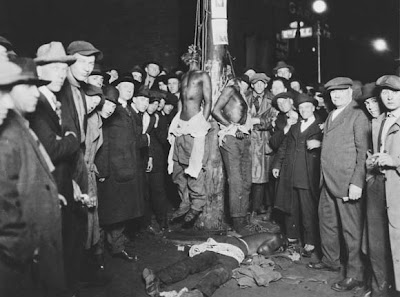 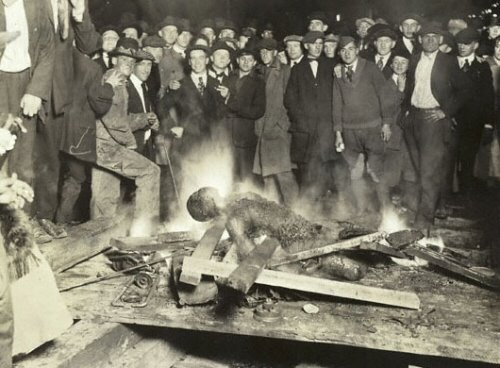 Posted by Craig Hickman at 9:02 AM

I visited "Without Sanctuary". Like passing a horrible car accident, I did not want to look but could not refrain. I made it to around image number 30 or so before I just had to stop.

I am not sure if I should thank you for posting it or curse you. Nevertheless, we need to keep history like this available so that hopefully it never happens again with the regularity it did on both sides of the turn of the 19th -20th century. A very ugly chapter and sad reality of our past.

The one consolation if there is such a thing regarding such a horrible tendency of America back in the day - the only recorded lynching in Maine occurred in 1873 in Aroostook County. Jim Cullen(white) was lynched for alledgedly axing two men to death who had come to arrest him for alledgedly stealing some shoes.

As you were "floored" by this site, I was astounded. After some further checking, apparently somewhere in the neighborhood of 3400 people were lynched between 1882 and 1968. 72% or so were black.

Anyway, I just stoped by to really check and see if you were still blogging and wish you well. As usual I leave with more than I came in with. Thank you.